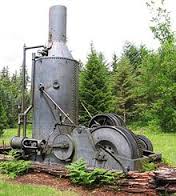 “Donkey Riding” is a traditional work song or sea shanty originally sung in Canada, Scotland and the Northeastern United States. The earliest written record of the song dates to 1857 and the tune and words are an adaptation of Hieland Laddie.

It is generally, but not universally, agreed that the “donkey” of the song title is a reference to the steam donkey, a single-cylinder steam engine invented in 1881 (NB inconsistent date), which revolutionized logging and the loading of ships. The donkey engine was first used in the forests of California but was soon used widely in loading ships for transport.

“A shanty with words similar to [Hieland Laddie] and the same or almost identical tune is Donkey Riding. This was also very popular among the timber droghers both in Liverpool and Canadian ports, and was used as both a capstan and runaway song when working cargo. I had my version from an old shipmate called Spike Sennit, who said it was just as popular at sea as in port. The compiler of the Oxford Song Book (II), who gives a version very similar to mine, states that it was “not a shanty … but … a song which helped the ship’s company stow deck cargo.” I’m afraid this is tying the meaning of the word shanty down a bit too tightly! Many work-songs used by seamen and dockers to stow cargo (in particular lumber and cotton) were the same as those used for capstan and other jobs at sea. And vice versa. Both Bullen and Doerflinger tend to show this, as well as do shanty books in Scandinavian languages. Many Scandinavian shanties used at capstan and pumps were sung when stowing timber aboard Baltic barques and timber droghers. Much improvisation was given to this song and many indecent lines found in the regulation verses.”

Apparently, in singing “Donkey Riding” you use a heavy, swinging beat and a natural, robust vocal sound. The whispered quarter-note rhythms imitate the sound of the steam-powered, single-cylinder donkey engine. We are told to “Keep tempo steady and the singing robust!” 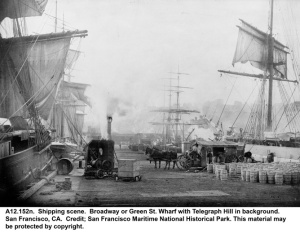 Spot the donkey engine on wharf in San Francisco

For more information checkout the following sources from which the above was collated: