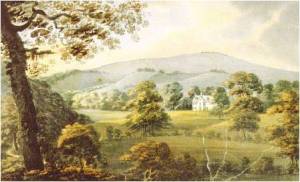 The Haldon Hills – whose name may be derived from the Old English Haw-hyll dun, meaning ‘look-out hill’ – are often referred to as the ‘hidden’ hills of Devon. Apart from its forests and landmark tower, most people know little of its rich heritage.

The rocks of the Haldon Hills tell a story stretching back over 360 million years to times when there were mountains, deserts and tropical seas near where we stand today. People have lived and farmed on Haldon for at least 5,000 years. It has been both a barrier to transport but also a commanding position from which to control the surrounding countryside.

Many of the roads over the hills are thought to have been of early British origin. When the Romans arrived they used the existing roads, occasionally modifying them with their advanced road-building skills. Today, the A380 follows a similar route to the ancient road over Haldon. Telegraph Hill was so named because of the Naval messages that were signalled by semaphore flags, passed from Plymouth to London during the Napoleonic Wars. These semaphores were permanently manned and watched.

Positioned around the foothills of Haldon are important country estates, several built during the eighteenth century by local gentry wishing new houses within reach of Exeter. The houses and gardens are the work of notable architects and designers such as John Nash, Anthony Salvin, Lancelot ‘Capability’ Brown, Humphrey Repton and David Veitch.

One such house, Haldon House, was built in the style of Buckingham House in St. James Park, (now Buckingham Palace). Often quoted as one of the finest country seats in Devon, it was the home of the Palk family for 120 years. For over 100 years the walls of Haldon House were adorned with many excellent paintings, especially Dutch works of art. Due to the eventual financial decline of the family, all the paintings were either disposed of through family members or ended up in one of the many sales that took place at Christie’s from 1891.

Racing at Haldon first took place c1665 in the reign of Charles II. It has been run under Jockey Club rules since 1769 and prize money has increased from £50 to over £70,000. There has been a Haldon Gold Cup since c1820. The present racecourse is the second highest in the Kingdom – only Bath is higher – and the longest bar Aintree. It is one of the most attractive courses in the land, and the views of the action on this undulating course are superb.

When Isambard Kingdom Brunel was asked to build a railway line from Exeter to Plymouth, he chose to run it along the coast via Starcross and Dawlish, then up the Teign estuary to Newton Abbot. This proved cheaper than laying the line over, or under, the Haldon Hills and still remains as part of the Great Western Railway. It was not until 1903 that the Exeter and Teign Valley railway line went through the northern part of Haldon Hills at Perridge, offering an alternative route when the coastal line was closed due to bad weather at sea or rock-falls on the line. The scenic Teign Valley line was eventually closed by the 1950s.

The site of the long disused Haldon Aerodrome was on Little Haldon near the Teignmouth Golf Course. Opened in 1929, the high winds gusting off the moors and sea, the mist and the fog, and the often waterlogged fields, made take-off and landing an interesting, if challenging, experience for pilots. Nevertheless, Haldon had an annual airshow and was part of the route between Plymouth and Cardiff.

During the 1930s, the Ministry of Labour set up the Haldon Instructional Centre to accommodate and re-train unemployed men to work in Haldon Forest. It was described in the Express & Echo as ‘a centre of definite and increasing value in the fight against the ravages of unemployment.’ The idea was to harden men and give them the confidence and skills to be able to return to work.

Before the conifer plantations, the Haldon plateau was covered by heathland and the lower slopes had long grown oak coppice, other broadleaves, and some conifers. This was exploited, unsustainably, during the First World War. It was in the aftermath of the war that the Forestry Commission was set up to provide homegrown timber and reduce our over-reliance on foreign imports.

Haldon Forest is home to a wide range of wildlife, everything from black Fallow deer through to a rare butterfly. It is also a Site of Special Scientific Interest (SSSI) due to the presence of birds of prey, nightjars and butterflies.

The above information has been extracted from:
Haldon’s Hidden Heritage, produced by the ‘Centre for Contemporary Art and the Natural World’

1 thought on “The Haldon Hills”