From the Saxon word ‘don’, meaning a dune, down or hill, the Den as it is known today has slowly developed over time but has always been a focal point of Teignmouth activity. It has been used for the laying out of fishing nets, the production of salt, as a fashionable promenade walk, for a concert and entertainment venue and for various sports including horse racing.

Originally the Den was a sandbank separated from the land by the marshy estuary of the Tame. In 1533 Leland, chaplain to Henry VIII, described it as:

“at the west side of town is a piece of sandy ground afore spoken of caullid the Deane, whereon hath been, not many years since, diverse houses and wine cellars.”

Some years after the infamous French raid on Teignmouth in 1690, Teignmouthians petitioned Sir William Courtenay in 1744 to allow them to erect at their own expense a small battery in East Teignmouth. The fort was built near the present lighthouse on the Den, by a small hillock called Dogges Hill.

In 1759 there are references to sheep being grazed on the Den which, where it was dry enough, produced a plentiful wiry grass. Three years later the Royal magazine wrote that the principal promenade of Teignmouth (the Den) was a pleasant place covered with wild thyme.

In 1773 the diarist Fanny Burney mentioned that: there were donkey races on the Den; once there was an ass race in which 16 donkeys took part, and a pig race; also that cricket was played on the Den and that there were wrestling matches.

In letters from a local businessman, Robert Jordan, in 1799 there is mention that “Four houses are to be immediately built on the Den by Mr G Templer and his brother Henry, and several others will be begun by Spring”. It appears that the first house to be built on the Den was Denn Cottage, constructed by John Kendall who had also built the carved Saxon door of St Michael’s church. The cottage was at the far southern end of the Den; unfortunately it was allowed to go into disrepair and was finally demolished in 1987.

The building developments which ultimately created Den Crescent were made possible by Robert Jordan and associates who organised the draining and infilling of the marsh that was the Tame estuary separating the Den from the ‘mainland’. This laid the foundations for Teignmouth becoming a fashionable resort in the Georgian and Victorian eras with the construction of the seafront buildings you see today. 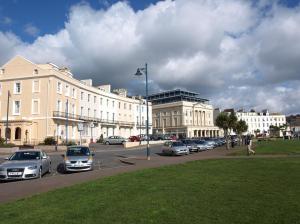 The external appearance of Den Crescent and its centrepiece, the Assembly Rooms, built in the 1820s, is relatively unchanged today. The Assembly Rooms were the hub of the town’s social life in the 19th century and lavish balls took place in the 70ft long ballroom. It was converted to an exclusive gentleman’s club in the 1870s and then to a cinema in the 1930s. The cinema closed in 2000 and it has been converted into apartments, with a pub and restaurant in the ground floor.

The Pier was constructed in 1865 at a cost of £8,000. It was enlarged in the 1900s to provide a pavilion complete with ballroom and a new landing stage for pleasure steamers. All types of traditional seaside entertainment were performed there. Stuntmen were featured such as one-legged ‘Peg-leg Pete’ who would delight the onlookers by setting himself alight and then diving into the sea. Crowds would gather on the pier and in small boats to watch water polo matches organised by the Teignmouth Swimming and Life Saving Society. Members of the Teignmouth team were Devon champions for many years. 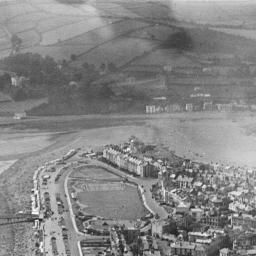 In 1869 the Local Government Board bought the Den from Lord Devon and laid it out as a pleasure ground. For the amusement of visitors and residents a bowling green was laid out on the Den in 1909 and tennis courts were made in 1910. Maps of Teignmouth from 1889 show the Den laid out as a park with three main lawns, a perimeter path and a fountain. The ornamental beds on the promenade were laid out in the late 19th and early 20th century.

Nowadays the Den has a superb children’s play park area, tennis courts, a bowling green and still retains the seafront promenade and large grassed area used for communal events. In 2009 the rock band ‘Muse’ returned to Teignmouth to perform “A Seaside Rendezvous” – a duo of concerts on the Den.  All the band members had been students at school here and were enthusiastically received by thousands of fans.

The above has been extracted from: