Eastcliff House was mentioned as early as 1821 in “Guide to watering places on the coast between the Exe and the Dart, including Teignmouth, Dawlish, and Torquay” published by E. Croydon:

“continuing on from the east of the Den, a path-way leads up the cliff, where you have a view of the residence of Dr. Tayleur”; and, in a later version,

“while near the town of Teignmouth stands the beautiful residence of W. Tayleur, M.D”

Dr Tayleur probably came to Teignmouth because of Teignmouth’s growing reputation as a health resort, attracting people with health needs. His family came from Shropshire, where his father was High Sheriff, and a member of the landed gentry. William was the second son, and so needed to find some occupation. 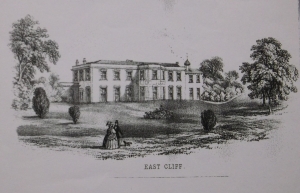 After Dr Tayleur’s death in 1836, the house was sold to George Savage Curtis, who enlarged it considerably, and named it Eastcliff House. There used to be a tunnel linking the house to stables and a walled kitchen garden across the Dawlish Road.

The railway was built in 1846, and initially went under the garden of Eastcliff House through a tunnel. This was opened up into the present cutting in 1884.

The house later became the Overcliff Hotel, and had 25 bedrooms.

It was demolished during the 60s to make way for the car park. The building now used by the youth club and The Cave project was originally built as a bus station.

The house was obviously quite an impressive residence in its day as can be judged from this description of the sale of the house in 1837:

“To be SOLD by private contract, either entire or in Lots, – The FEE of the admired and truly elegant MANSION of the late Dr Tayleur, situated at the extremity of that favourite watering-place Teignmouth, with Grounds extending to the Sea Cliffs.

The House is most tastefully erected on an elevated spot, with a sloping Lawn, Flower-garden, and Pleasure-grounds of nearly two acres and a half, containing much ornamental timber, and is approached by a richly-fitted Conservatory. The interior is fitted up in the most exquisite style, and comfort has been studied in every part of it, without regard to expense.

This unique Residence, which has a south-eastern aspect, must be seen to be duly appreciated, and will form a most enviable retreat for a valetudinarian.

There is a Double Pew in the Church, close adjoining.

The Walled Garden contains upwards of an acre, with a grapery, gardener’s-room, fruit-room, pump, etc. A three-stalled stable, double coach-house, and store-room, with rooms over, and a curtilage, pump, and half an acre of garden-ground. A Field, adjoining the Lawn, containing upwards of an acre, and another contiguous to it, of nearly the same size.

Also a Marine Cottage, with a southern aspect, surrounded by nearly an acre of garden-ground, with a beautiful view, and a Pew in the Church.

The whole of the premises are within three minutes’ walk of the church, baths, promenade, public rooms, etc. For viewing the property, and to treat for the purchase, application may be made to Mr. Tozer, solicitor, Teignmouth.”

Guide to watering places on the coast between the Exe and the Dart, including Teignmouth, Dawlish, and Torquay” published by E. Croydon.