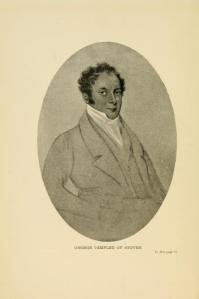 George Templer (1781–1843) was a Devon landowner, and the builder of the Haytor Granite Tramway. He was the son of James Templer of Stover House, Teigngrace, Devon. He inherited the estate on the death of his father in 1813.

With little of his father’s business acumen, he left much of the running of the estate to his lawyer whilst he led an extravagant life. He was very keen on fox hunting and was a friend of the famous huntsman, Jack Russell. He also enjoyed amateur dramatics, and invited many celebrities to Stover, including Mrs Siddons. He was a “poet of no mean order” and his talents were much appreciated in his day. There are references to a number of poems he had written but I can find no published collection. Extrovert in character, and cavalier to the point of folly, he was probably typical of his class and society at the time.

He had six children by his mistress, Ann Wreyford, who was the daughter of a local farmer. He treated these children as legitimate and ensured that they were properly educated, and in due course were directed into good careers or marriages. According to a post-script in the family archives it appears that he had actually married Ann Wreyford. He also had two daughters by his (second) wife, Charlotte Kennaway, the daughter of Sir John Kennaway, whom he married in 1835.

Templer completed the Teigngrace canal which had been started by his father in about 1770, and he also built a 7 mile long railway with granite ‘rails’ or half grooves cut into granite slabs which steered the wheels of horse drawn wagons (known as the Haytor Granite Tramway). This ran from Haytor on Dartmoor, where there was a granite quarry, to the head of the canal and was completed on 6 August 1820. The route down remains today and forms the Templer Way, an 18 mile walking trail from Haytor to Teignmouth.

To complete the transportation route for the quarried granite Templer also built New Quay at Teignmouth so that it could be loaded on to ships. In 1825 he formed the Company of the Proprietors of the Devon Haytor Quarries, with a capital of £200,000. The company provided several thousand tons of granite a year for buildings such as the British Museum and the National Gallery. Grey Haytor granite, along with two Scottish granites, was specified by an Act of Parliament in 1825 for the rebuilding of London Bridge, although it is unclear where the Devon granite was used.

Socially, in 1820 George was a Lt. Colonel in the South Devon Yeomanry; he founded the South Devon Hunt; and, in 1823, the Teignbridge Cricket Club. His name also appears regularly in the attendees at the Teignmouth Balls.

However, the lack of success of the quarrying business (the competitive Cornish granite was being mined closer to the sea and was therefore cheaper) and his extravagance and life style led him into debt. He was forced to sell Stover House, the tramway, canal and New Quay to the Duke of Somerset in 1829, and blamed his lawyer for his problems. He subsequently wrote a poem in which he railed against ‘the Scurvy Lawyer’.

He then went abroad for a while but by 1833 he had returned to the area, and built Sandford Orleigh house on the outskirts of Newton Abbot:

“Upon his return, a year or so later, he set about building that beautiful house, Sandford Orleigh, commanding the full stretch of the tidal portion of the River Teign on one side, and facing the tors of Dartmoor on the other.”

He was employed as the granite company’s chief agent in Devon, but was in conflict with the directors over the low pricing of contracts.

George Templer died in December 1843 after a hunting accident. He was taken to the hospital at Newton Abbot and then to his home at Sandford Orleigh where he died. He is buried in the family vault under the little church at Teigngrace, “within a gunshot of Stover Park, the scene of his former glories and the home he had loved so well”.

Extracted from the following references: