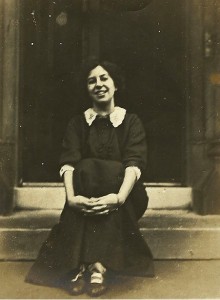 Alberta Vickridge on the doorstep of her home, Beamsley House, Frizinghall, Bradford (circa 1919/20)

The poet Alberta Vickridge (1890-1963) had nine books of her poetry published, won a Bard’s Crown and Bardic Chair at an Eisteddfod in 1924 for her poem, The Forsaken Princess, and ran her own printing company alone from the attic of her home in Frizinghall, near Bradford. Her work was admired and praised by JB Priestley, Wilfred Gibson and Agatha Christie.

Alberta was born in Bradford, one of three sisters brought up in a strict Methodist household. After leaving school she began to write poetry and articles for both national and regional magazines and newspapers. She also reviewed books for The Yorkshire Observer and had poems published in magazines, such as Country Life, the Lady’s Companion and the Woman at Home.

When the Great War began in 1914, Alberta was in her mid 20s and was a regular contributor to The Wayfarer, a well-regarded literary magazine. She knew its editor, and when he was called up in 1916, Alberta took over his role – a post she kept until 1927.

Because of her mother’s poor health, the family often spent the winter months in Torquay. She loved Torquay and expressed her feelings in the poem Devon Blue.

While in Torquay, Alberta decided to contribute to the war effort and in late 1917 volunteered to join the Voluntary Aid Detachment (VAD) . Established in 1910, VAD provided volunteers to support the professional military nursing service. It rapidly expanded after the outbreak of war and had 80,000 volunteers by 1916.

Alberta worked as a nurse at the Red Cross Torquay Town Hall in Torquay. Wounded Belgian and British soldiers came first to the hospital, followed by those from the New Zealand Expeditionary Force. Alberta nursed alongside the young Agatha Christie. In a letter from Agatha to Alberta we see that Christie admired Alberta’s work and that the two women had become friends.

It was her nursing experiences that led Alberta to write two of her most anthologised poems: In a VAD Pantry and Out of Conflict.

After the war, Alberta produced the Jongleur poetry magazine which ran for nearly 30 years. She never married and died at the age of 73. Alberta is buried with her mother and father near Saltaire, West Yorkshire.

Acknowledgement:  The above summary has been taken from ‘Torquay’s Other History’ page

Want to know more?  Check out the Alberta Vickridge site