If you don’t come to Teignmouth because it’s a seaside town you may come as a visitor to one of the many festivals that Teignmouth hosts – poetry, science, jazz, general music, classical, folk.  Today’s poem is a memory from one of the folk groups, Mr Baker’s Dozen, which took part in the 2005 folk festival. 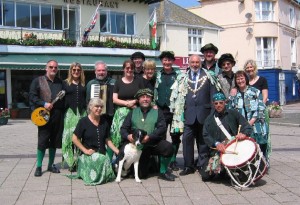 The words are set to the music of a traditional song called Yarmouth Town. Some of it is quite personal to Mr Baker’s Dozen and reflect events that happened to them over the weekend. They would not mean much to any else. Freddie was a dog that they took with them.

On the ferry, quite exciting. Thunder and lightning, very, very frightening
Stair rods falling just like rain, shades of Priddy. Oh no not again!!

The sun came out and all was well, but what’s that hold up, who can tell,
Squire up ahead phoned to say ‘There’s a big delay, don’t come this way.’

Into the field, no time to lose. Up with the tent and out with the booze.
Merilyn and Ted came, oh what joy, three cheers for a girl and four for a boy.

Had another drink, some food, and song. Got a little merry well it didn’t take long.
Had a little visit from the chap next door. Oh what pleasures lay in store!!

Things didn’t start too well next day. They sent us on a ferry and we had to pay.
On the gang plank Fred stood and cried, had to be carried, how undignified.

No one at the pub to watch us dance. Could we get a drink? No not a chance.
Landlord busy painting the wall. ‘Don’t stand there!!’ There’s paint on us all.

Dancing wasn’t the best we’ve done, not to worry it’s just for fun.
Mummers playing everywhere but ours is the best so we don’t care.

Showers ran hot, showers ran cold, a seagull perched to SPIT and scold.
Mind where you sit, get ready to duck, you may get more than a little good luck!!

Procession was short, it just seemed long. Some got it right and some got it wrong.
Fountain foaming everywhere, bubbles on the ground and bubbles in the air.

For Merilyn and Ted we had to run through our Christmas play, less a line or two.
A few more songs and a little more booze, then off to the pub our grub to choose.

Went to bed still humming a tune, but Sunday morning came too soon.
Father Abraham seemed a good way to warm us up and start the day.

We almost got our dances right, had a big hit with Tommy’s Delight.
Made the most of Ted with his guitar. Hammed up the Mummers Play and Fred was a star.

Spent a lot of time in a triangle, but was it big or was it small?
Posed for a photo with the Mayor, but only after Donna had combed her hair!!

Could go on and on some more, but this little song is becoming a bore,
So lets just drink to a good weekend and bring this festival to an end.

Want to know more about Mr Baker’s Dozen?  Check out: 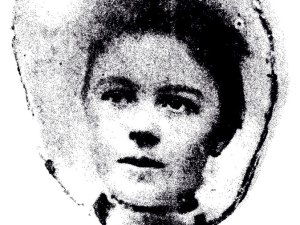 So what is the connection between T S Eliot, Ezra Pound and Teignmouth?

The answer is a young Victorian woman named Leah Laforgue (née Lee), described as “a black-eyed, chestnut-haired Devonshire beauty”. Born in 1861, she was the daughter of Samuel Lee, a well-to-do draper of Teignmouth and her story is quite extraordinary.

She left Teignmouth and England to become governess to the children of Empress Augusta in Berlin. There she met a young Frenchman, Jules Laforgue, who was a Reader to the Empress Augusta and who took English lessons from Leah. Importantly, though, he was also a poet.

It appears they had a whirlwind romance, left Berlin, got married in England at the Church of St Barnabas in Kensington and then returned to Paris where Jules Laforgue could immerse himself in the cultural maelstrom that was Paris in the 1880s.

Less than a year later Jules was dead, having contracted TB. Leah, Jules’s “Petite Personage”, died a year later from the same disease. She was buried in the main cemetery off Exeter Road in Teignmouth.

Jules Laforgue was no ordinary poet. He is widely recognised as the father of modern poetry and the creator of “free verse” or “vers libre” as it was known at the time. We only know as much as we do now about Jules Laforgue and his works because Leah had kept all of his manuscripts and had handed them over to a friend, Teodor de Wyzewa, in Jules’s literary circle.

T S Eliot discovered Laforgue in 1908 when he was at Harvard and it changed his life. Eliot said “Laforgue was the first to teach me how to speak, to teach me the poetic possibilities of my own idiom of speech”. Ezra Pound described Laforgue as “an angel with whom our modern poetic Jacob must struggle,” and “perhaps the most sophisticated of all French poets”; in 1913 he added, “Practically the whole development of the English verse-art has been achieved by steals from the French.”

Even though it is not about Teignmouth (although it mentions a ‘cliff-bound village’) I have included a poem here by Jules Laforgue in recognition of the role that Leah Lee played in ensuring that his work lived on. The poem is a translation by Patricia Terry published in 1958 and comes from Laforgue’s first volume Complaintes.

Man isn’t really so bad, nor woman ephemeral.
Ah! fools cooling your heels at the casino,
All men weep one day, and every woman’s maternal;
Everything’s filial, you know!
It’s only that Fates employ such sorry prejudice
To make us, far and separate, self-exiles,
And blindly calling each other egotists,
And worn out with looking for some unique Anodyne.
Ah! until nature has pity on us,
I’ll take my life monotonous.

In this distant cliff-bound village, towards the bells
Once again I come down, through the piercing stares
Of children out for blessings on tepid rolls;
And then, at home, my wretched heart despairs.
The old roofs’ sparrows chirping at my window
Watch me eat, without appetite, à la carte;
Perhaps they house my dead friends’ souls?
I throw them some bread; as if wounded, they depart!
Ah! until nature has pity on us,
I’ll take my life monotonous.

She left yesterday. Perhaps I mind?
Ah yes! So that’s what hurts!
My life is caught among your faithful skirts!
Her handkerchief swept me along the Rhine …
Alone. — The Sunset holds back its Quadriga’s prancing
In rays where the midges’ ballet is dancing,
Then, toward the soup-smoking roofs, he complains …
And Evening so elusively explains …
Ah! until nature has pity on us,
Must life be so monotonous?

Fans, pointed arches, or for incest – how many eyes,
Since Being first had hopes, demand their rights!
O skies, will the eyes decay like the rest?
Oh, alone! alone! and so cold!
How many Fall afternoons can life digest?
Ennui. cold eunuch, wallows in our dreams!
So, since we’ll never be madrepores again,
We’d better console each other, my fellow men.
And, until nature has pity on us,
Let’s try to live monotonous.

Meanwhile, returning to why people come to Teignmouth, for many it’s just a delightful seaside resort in Devon.  Here’s a piece written on the motorway by a Scottish lady who apparently came down for the day!

Three lanes of traffic, all heading south
Cars, bikes and lorries, in the same direction,
Are they going to the seaside, at Teignmouth?
And taking their kids for their summer vacation

Maybe they’re going to Exeter or Torbay
Or to the races at Newton Abbot like us
We’re only going for the day
Long distance travel, to us, it’s no fuss

In the slow lane, a Morris minor driven by an old chap,
Looking at his face he don’t look very amused
I think he’s lost, the wife’s reading the map
Wonder how much petrol that old car has used

Who’s going where, for how long and why?
On our journey, this guessing game we like to play
It’s more fun for teens then playing, I Spy,
And motorway travel’s less tedious this way.

What is it that attracts people to Teignmouth?  The poems so far have covered many aspects of the town, its character, the events that have framed its history and shaped the town to what it is today.

The next set of poems complement this theme, suggesting why people might come to Teignmouth; the poems don’t need to be complex to convey people’s reasons.

We start with a particular style of poem called a “villanelle”, simply entitled “Teignmouth” by Margaret Sheppard.

I’ve journeyed five continents to see
The famous sights which do impress;
A charming town beside a changing sea

Sample the local breakfast, lunch or tea
The kindness, goodness and largesse!
A charming town beside a changing sea