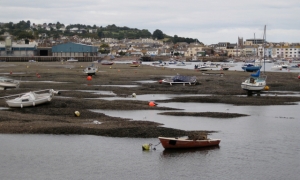 We’ve had a few poems about the Salty and its inhabitants – the cormorants, oysters, oystercatchers etc.

Here’s another which gives a different view of the shellfish to be found on these low-tide estuarial flats.

Mussel bound
They sift the Salty
To ply their trade –
The winkle pickers,
The shell seekers –
Here a bucket,
There a spade.

I hitch a ride
On a bit of the Teign
Left behind by the tide –
Free-falling down
To anonymous sand,
A cowering cockle
On a seaweed strand.

They crouch and probe
These mussel men,
Performing amniocentesis
On glorious mud,
And the pile in the bucket
Grows thud by thud.

I open a valve.
‘I’m stale’, I cry –
I know it’s naughty
But it’s worth a try!
The blue shells rattle
Like dead men’s bones
As the buckets pass by…

Blue not white.
Then I’m all right!
Moules Mariniere’s
The dish of the day.
I breathe a bubble.
Cockleshells
Rule OK. 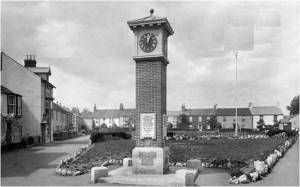 Walk back towards Teignmouth along the main road from the Clipper and you soon reach the village green, the site of the Shaldon War Memorial.

I found this poem on the Internet written by ‘Philip’ (I know no more than that). Together with the poem was a small tribute by Philip:

“This little Poem means little to anyone outside our little village in South Devon…A village of only 300 and yet 30 names on the local War Memorial. I composed this Poem for my own satisfaction, just to make these Heroes names to live again ….. Written at the Life Gateway to 11.11.11 in humble appreciation.”

You may notice the acrostic.

The Shaldon War Dead Memorial Clock Tower.
Heroes who gave their lives in war time;
Everlasting Memorial to their sacrifice.

Shaldon would remember Brave Souls ;
Hail to these Heroes as we remember.
As fought and died in the 1914-19 War.
Let us never forget the ultimate debt.
Dutifully paid by the local families
Of Graeme, Lucas, Cornish , Stephens
No not forgotten Gates or Colbram.

Dutifully, bravely Volunteered in 1914
East , Lambe  and Eardly-Wilmot RFC.
As did brave Tothill, Withey , Conybeare
Died all heroes in that world conflict.

To later conflicts A.J .Roberts in Malaya
Of R.S.Baker-Faulkner. D.S.O, D.S.C, R.N
We owe them all an irrevocable debt.
Ever as time goes by, may we not forget
Righteous Brave Sacrifice in time of War.
Want to know more?  Check out: 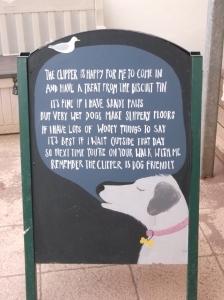 Verse has many purposes. I was walking past the Clipper Café in Shaldon a couple of weeks ago and spotted this sign outside. It made me smile, and isn’t that one of the roles of poetry – to provoke an emotional response? So much better than just a “Dogs Welcome” sign – well done the Clipper for your little piece of street poetry.

The Clipper is happy for me to come in
and have a treat from the biscuit tin.
It’s fine if I have sandy paws
but very wet dogs make slippery floors.
If I have lots of woofy things to say
it’s best if I wait outside that day.
So next time you’re on your walk with me,
remember the Clipper is dog-friendly. 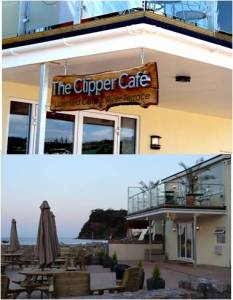 In the last post we crossed the Teign by the ferry, as would have Keats.  But in 1827 the longest wooden bridge in the country, almost a third of a mile long, was constructed across the river to join Teignmouth and Shaldon.  The bridge has had a chequered history, suffering the ravages of the environment and shipworm which have caused it to be rebuilt several times.  The bridge is still an iconic feature of the estuary – Muse and the Olympic flame crossed it in 2012.  The views from the bridge are stunning, both across the Salty down to the sea and upriver towards the heights of Dartmoor.  It was the inspiration for this poem by Kim Edwards.

There I was across the bay walking not an hour ago.
Now here I am.
If I had stayed where my eyes rest now
time would have moved on
the tide would still have filled the bay.
Spin drift still settled into inland emptiness
Just as now.

Would I have had to run and rush like this tide beneath this bridge
To catch myself here,
To fill the places in me emptied of your presence
My life’s landscape emptied of those I once knew, without knowing as my people
Washed out to that sea and emptied of their own lives
Taken like so much cliff face fallen
On the outgoing tide of Time, that vast majority element
That holds us all within this very moment.

Standing on the bridge my inner eye rests upon places where
The people I lived amongst lived as my organs live
Amongst one another deep within my overcoat of membrane and skin
All who once were part of me and I of them
No more mine now than my own life feels is mine
Stranger in it that I am
Filled with the flotsam and jetsam of other people’s lives
I no longer recognise nor truly fit within my own.

As here I stand now empty, alone
Filled with longing for the home of belonging I once knew
The tides turn, turn once more
Returning I turn, walk on.

So like Keats 200 years ago we’ve crossed the Waters of Teign by ferry and reached the far shore where he would have found the fishermen’s cottages of Shaldon and set out on his walk up the estuary to Arch Brook and beyond.

He would have looked up to the Ness headland but would the Ness tunnel have been there in his days for him to explore? A smugglers tunnel? A tunnel for transporting lime from the beach? Or simply a means of getting through the headland to enjoy the seclusion of Ness cove?

I found this short ditty on the blog of someone who is obviously intrigued by the tunnel and its origins.

Walk straight ahead.
Take the first turn on the right;
You can’t miss it,
It’s the only turn
Of course you’ll be alright.

Once around the corner
You will see just where to go.
Watch the steps
They can be slippy.
Just straight ahead, you’ll know.

At the tunnels end
Find a secluded beach;
But the cliffs
May not be stable,
So take care, stay out of reach.

Cormorants stand sentinel-like on the edge of the Salty

Two poems for the price of one today. They may be somewhat peripheral to Teignmouth but there are links.

They were prompted by a short article I found on the Salty, the iconic bank of sand and shingle at the mouth of the river Teign, extending from Shaldon on the south shore out into the estuary. It is a haunt of many shore and sea birds, including the redoubtable cormorant which is the common theme of the poems.

This first poem was included in the article and appeared as an anonymous poem in the Penguin Book of Comic and Curious Verse of 1952, edited by J.C.Cohen. Cohen apparently believed that it had actually been written by W.H.Auden but other research identifies Christopher Isherwood as the possible author in 1925.

The common cormorant or shag
Lays eggs inside a paper bag.
The reason you will see no doubt,
It is to keep the lightning out.
But what these unobservant birds
Have never noticed is that herds
Of wandering bears may come with buns
And steal the bags to hold the crumbs.

The second poem can be found on the Ted Hughes poetry trail at Stover Park, former home of and subject of a poem by George Templer:

You’ve a hook at the end of your nose
You shiver all the day
Trying to dry your oilskin pyjamas
Under the icy spray.

But worst – O worst of all –
The moment that you wish
For fried fish fingers in a flash
You’re gagged with a frozen fish.